Sharbati wheat is a regional variety of atta, derived from the wheat grown in the Sehore and Vidisha regions of MP. Also known as the MP wheat, Sharbati atta is sweeter in taste and better in texture. The grains of Sharbati atta are bigger in size and has a golden sheen to it. Interestingly, Punjab in India is known for the best agricultural produce, including wheat. However, the sharbati variant from MP remains a notch up the Punjab variants too.

An interesting fact about Sharbati atta is that drought brings out the best quality in this wheat. This wheat flour belongs to the Triticum Aestivum family. The region growing Sharbati wheat, do not necessarily have an organized, large scale cultivation of this crop. Being rain water irrigated, the soil for Sharbati wheat is high in potash content and low in humidity. This amazingly ends up increasing the protein content of the wheat by almost 2% more as compared to the wheat atta. This also leads to Sharbati wheat crop skipping the requirement of pesticides being used. Hence the flour from sharbati wheat crop automatically qualifies as a better flour over the rest.

Due to the organic way Sharbati wheat is farmed, it holds an answer to a lot of health issues that are common today . With everyone hankering for a healthier way to eat, Sharbati wheat, by the very virtue of its cultivation, avoids the usage of insecticides and pesticides making it a healthy choice.

Being a crop from drought stricken Shehore, Sharbati wheat grains have lesser water content in them. This makes the atta is a little dry. Hence making a dough from the Sharbati atta requires more water. This in turn makes the chapatis and rotis made from sharbati wheat flour softer and fluffier. 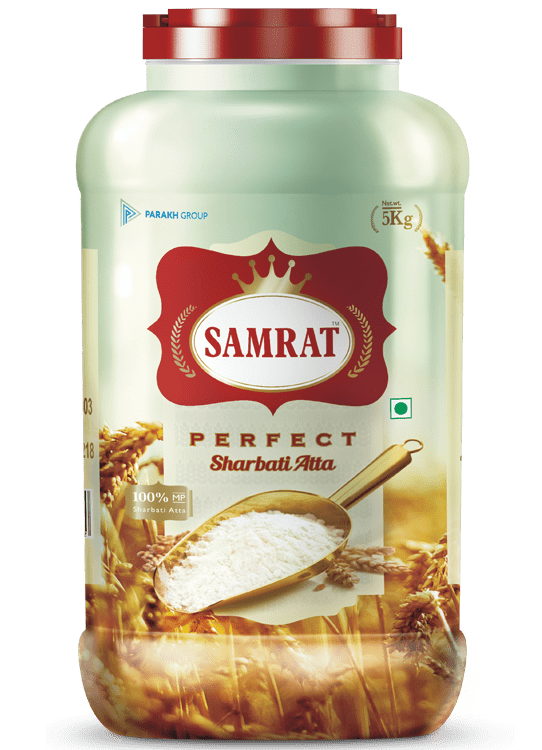 Health is another aspect that Sharbati atta contributes to. Food is an inevitable necessity of life. However with the sedentary work life becoming a norm of the urban life, improving the quality of life has become a task. Obesity has become a prevalent health problem. Unfortunately, it is not just the adult population that is being affected. Children too are falling into the vicious trap of obesity. A major change in lifestyle to alter the health graph, can be adopted with a switch to Sharbati atta. This gehu curbs our carbohydrate intake, organically. Each serving of the Sharbati atta has about 110 calories, with the total carb at 23 g (approximately) and 4 gram dietary fibre. This leads to a healthy balance with rotis or chapatis being a staple in our diet.

The way primary raw materials are processed to make them edible, also plays a vital role in keeping the nutrition intact in food grains. India has always been a country where people have preferred naturally husked and grounded grains, may it for wheat or spices. Hence stone grounded atta has always been our preference. The traditional stone grounding has its own benefits. One, the stone grounding gehu is a slow process, which ensures that wholesome wheat grains (kernel included) are grinded finely along with the grains. Another aspect to this process is the preservation of natural oils present in wheat. Mill grounding of the grains, where steel grinders pound the grains, damage the natural oils and vitamins of the gehu.

In general, wheat is lighter on the stomach. That is one of the reasons why chapatis and rotis are preferred for lunch and dinner. With Sharbati atta, the story gets better. Rich in Mangnesium, Sharbati atta when consumed, aids more than 300 enzymes in the body to use insulin and glucose secretion. Consequently, this helps in blood sugar control. Sharbati gehu atta, therefore, is a safe gehu to intake, for Type 2 diabetics patients.

Food is expected, not only to nourish our physical being, but also help us live healthy with no health issues. One of the most common problem faced today is that of gallbladder stone. This is a consequence of undefined eating timelines that most of us have. Gallbladder stones are also created due to the secretion of  acidic bile juice. Wholesome wheat atta, due to its property of being insoluble, lowers bile juice secretion along with smoothening digested food transit. This in turn also helps in preventing colon cancer in general.

The term ” wholesome food” is probably overused in many senses. However the bottom line is, nothing beats a good meal, which provides the body with all the required ingredients and nutrients. A balanced meal also lays the preventive foundation for health scares. Wheat being one of the staples in our diet, also contributes to our health with its ability to fight the carcinogens present in the body, especially in women. Study and research at UK women’s cohort study, has found that wholesome wheat along with fruits helps in preventing breast cancer. Sharbati atta can be the alternative to the refined version of milled wheat flour which is not really a healthy choice.

With food becoming inorganic with each passing day, children are being affected in multiple ways. Juvenile diabetics and paediatric obesity is now a prevalent health concern. Lifestyle changes and food habits need an urgent reassessment to counter this situation, along with identifying food that should be included in every meal. Wholesome Sharbati atta is one such inclusion, which has proven its stand in aiding weight loss.

Overall wellbeing of our health is reflected in our general bearing, may it be our everyday health or the skin texture. Wheat grains contain Selenium, Vitamin E and Zinc which fight skin problems like acne, tanning and skin cancer. Being high on fibre content too it adds to the bulk of the digested food. This consequently leads to toxins being expelled regularly which helps in maintaining a  smooth skin, free of problems.

Sourcing organic food is a struggle in today’s pesticide fed farms. However in this chaos, sharbati wheat, by the very virtue of how it is  grown, has retained its authenticity of being organic. Grown as an unorganized crop, in drought affected area, the scale at which Sharbati atta is farmed is not always commercial. This is a boon when it come to sharbati gehu being wholly organic. Lighter and nutritious, with properties which help in contributing to health benefits, Sharbati flour is a definite choice to switch to.

Disclaimer – “Views expressed in the blogs, are exclusive thoughts of the author and are not necessarily aligned to Samrat India’s policies”.